By Vivian Cleis McLaughlin, a former neighbor and friend.

Daugherty Township achieved its township status by a mere four votes in 1893. It was originally part of Sewickley Twp. The land which includes present Daugherty Twp., became part of New Sewickley in 1801 and then included Pulaski in 1854. 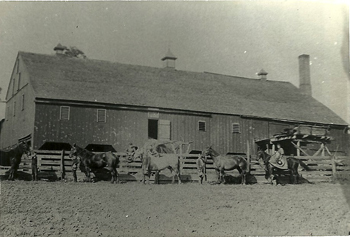 Anton Krut was born at Neider Schafersheim, Alsace-Lorraine in 1830. He came to Pittsburgh, Allegheny County in 1849 and pursued his trade as wagon maker. Anton married Theresa Muller in 1855. They had the following children: Philip, John, George, Joseph, Henry, Anthony, (who was a florist in Butler, Pa.) Albert (an engineer), Charles (in charge of the farm), Theresa, Mary and Rose. In 1854 he went into business for himself at Tunnel and Forbes Streets. Here he continued for five years then moved to South Fourteenth Street where he and his son, John A. ran the business until his death. Mr. Krut died April 5,1903 at the age of 73. He is survived by his children and wife who died Dec. 13, 1904. Both are buried in the Daugherty Cemetery in Daugherty Township, New Brighton.One of several farms in Daugherty Twp. is the Krut Farm, purchased by Anton Krut in July of 1857, from Jesse Dean and his wife Tabitha. Mr. Dean had bought the farm from Adam Bright and his wife Eliza. The farm then was in Sewickley Twp. then Pulaski Twp. Census records list Mr. Dean as a river boat pilot in Allegheny County. According to relatives of Mr. Dean the farm was bought for speculation. The farm complete with house, barn and six out buildings and 86 acres of land was purchased by Mr. Krut for $3,000.

According to Anton’s will he left his business to his son John. Mr. Krut bought the farm to provide a good atmosphere for his growing family. Eventually the farm provided employment for them all. Charles Krut was in charge of the farm. This is the period of time that I remember along with the operation of the Cider Mill.

Searching back and talking with the grandchildren. Grace Miller Reskovic, Dorothy Majors Lang Fisher, and Frances Majors Kolb, I discovered this farm was more than an ordinary farm. The barn contained a planning mill, cider mill, wagon shed, stalls, cows grain bins and the usual found in most barns.

This barn was unusually large. The outbuildings on the farm consisted of a summer kitchen, spring house, storage house of vinegar vats, smoke house, blacksmith shop and chicken house. The planning mill was used to plane lumber for the wagon works in Pittsburgh. The cider mill, used to make cider, which in turn was stored to ferment into vinegar. Then vinegar was wholesaled to clients as far away as Pittsburgh and Ohio. When the Pennsylvania pure food and drug act came into effect and inspections were made, Mr. Krut did not want to update his equipment or get into bottling, so he sold the vinegar clients.

The cider mill was then opened to the public. Every fall this was a very busy place for the local farmers to go to get their apples pressed for their own supply of cider and vinegar. Horses with their wagon loads of apples would line the roadway early in the mornings, everyone vieing for an early spot in line. As time went on and apples were ground you did not know whose apples were being ground. The farmers that used the juice for their own consumption of course wanted the best. Those who sold the cider and vinegar used a second grade of apples that were not very appealing to the late comers. The cider mill operated three days a week. It had to shut down then to dry the straining cloths. I remember those huge brown cloths drying on the clotheslines.

There was also a blacksmith shop on the farm. This was used to handle the iron work that went into the wagon manufacturing. The Krut’s did a lot of truck gardening and kept cows for their own milk supply, chickens for the eggs and meat. Pigs were fattened for the fall butchering.

I remember this was the depression days but there was never a shortage of food among the farmers and neighbors. Everyone shared their wealth of food. Money was scarce but there was plenty of food.

The barn and cider mill was torn down and the slate roof and barn siding sold strictly for mercenary reasons. The Krut family was a very affluent and respected family and an asset to Allegheny, Beaver, and Butler Counties where they contributed to the economic and commercial growth and development. Many 4th and 5th generations of the Krut family still reside locally and are very proud of their heritage!Charles Krut and his wife Mary Catherine (Myers) Krut had the following children: Marcella Krut, Mrs. Harry Miller, Mrs. Herbert Majors, and Carl H. Charles Krut passed away in 1928 and left the farm in charge of Mr. and Mrs. Harry Miller. his daughter and son-in-law. They ran the farm until their retirement when the farm was sold.